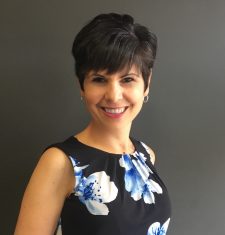 My name is Kim MacDonald. I am a wife and mother of two daughters (21 and 14) and I live in Hamilton.

For the past 20 years, I have worked as a national television host on The Weather Network, telling weather stories to Canadians from coast to coast.

On Dec. 1, 2016, I was diagnosed with breast cancer. As is the case with all women, it changed my world as I knew it.

The tumour was large — 10 cm — so my treatment began immediately with eight rounds of chemotherapy over four months. In May 2017, I had a double mastectomy and in July I began 25 rounds of radiation. I was diagnosed as HER2+, which meant a year of Herceptin infusions. Like a game of golf, there are 18 rounds which will come to an end this month.

The good news is, I had a complete response to the chemotherapy, which I’m told is rare. There were no traces of cancer found during post-op testing and my lymph nodes had not been affected. Considering how aggressive the cancer appeared at diagnosis, I had the best possible results from treatment I could hope for. In the end, the radiation was an insurance policy more than anything else. The Juravinksi Cancer Centre (JCC) literally saved my life.

At the beginning of this very difficult journey, I made the decision to go public with my diagnosis and treatment. Because my job was in media, it made sense to me to be open about my experience. I blogged about the nitty gritty details (kmacblog.com) and did a weekly radio show where I answered any question that was asked. I had my hair shaved on Facebook live so that others could be aware of what it was really like to face breast cancer straight on.

I didn’t realize at the time how much this would help me through a very difficult year. Not only did I receive an outpouring of love and support from friends and strangers, but I also heard from those women going through the same process. My voice became their voice and I was told by many that my attitude had given them strength. I can honestly say that I made many beautiful connections and was encouraged by others sharing their stories with me.

When your looks are tied so tightly to your work, it’s difficult to lose them. When you have to think on your feet, it’s hard to suddenly not be able to do it. The mental game is sometimes tougher than the physical one when it comes to cancer and treatment but somehow you find your strength. I met so many strong women along the way. As much as I may have inspired others, there were those who definitely inspired me.

I became involved with the BRIGHT Run early on, when my oncology nurse Kathie Ward approached me about it. Bald and wearing a pink wig, I appeared on Cable 14 to talk about the run and managed to emcee the launch, even though I was terrified the chemo fog would get the best of me.

This past BRIGHT Run was only a month after I had completed radiation but I was happy for the opportunity to give back to the place that had saved my life. I was accompanied by a team of family and friends who walked alongside me, on a beautiful sunny day, this past September. I am told that it had rained every year, so I summoned the weather gods to help us out this year. (Insert winky face here) If only I had such power.

This past October, 10 months after I had been told I had Stage 2B breast cancer, I returned to the job I love at The Weather Network. My hair was much shorter, and my clothes were a tad looser, but it was good to get back to my old normal. I started back slowly and have only recently achieved full-time status.

I cannot describe how supportive my company has been and how incredible the viewers were while I was away and upon my return. I have made my way back to the gym and have plans to climb Mount Kilimanjaro later this year.

Cancer treatment and research have come such a long way and things are changing and improving at a breakneck speed. This is why the BRIGHT Run exists in the first place.

It has not been lost on me how lucky I am to live so close to such a prestigious cancer hospital. The medical experts who worked with me at the JCC were both professional and kind. It’s truly amazing that they deal with cancer patients day in and day out and still managed to make me feel like my health and well-being were important to them.

I have lost my father and my mother-in-law to cancer. I will forever be grateful for the research being done at the JCC and the people who helped give me a second chance. I look forward to the day where there is no need for a BRIGHT Run or other cancer fundraising efforts, but until that happens, we need to continue to raise money and find some really comfortable shoes.

This profile was first published in the BRIGHT eNewsletter in February 2018.