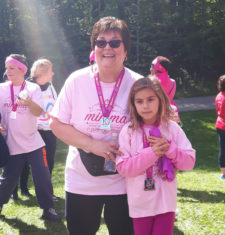 Breast cancer was not on Mimma Musitano’s radar. Not at all.

So when she was diagnosed with Stage 4 Invasive Ductal Carcinoma three years ago, she was devastated.

“We have heart disease in our family and that’s what I always worried about,” she said, noting both her parents died of heart-related issues. “There was no way I could have cancer. Just no way.”

On Sept. 21, 2015, the diagnosis was confirmed. And Mimma, youngest of eight children, aunt to numerous nieces, nephews, great-nieces and great-nephews, became part of our breast cancer community.

“I worked through chemo,” she said. “I had never missed a day of work. I just kept going.”

Mimma lives alone in the downtown Hamilton house in which she grew up and where she took care of her parents until they died.

She walks everywhere, enjoys travelling and is very close to all the members of her large extended family. She has worked in administration at Community Living Hamilton for 40 years.

“I love life,” Mimma said, her brown eyes sparkling. “I have a great life in Hamilton.”

She first had chemotherapy treatment, some of which was “brutal. I couldn’t walk some days.

“But I had help from my wonderful large family and my fantastic group of friends,” Mimma said.

Chemo meant she underwent her first surgery ever, to have a port installed. Following a two-month post-chemo break, Mimma had a mastectomy in February 2016, followed by 25 radiation treatments and a year of Herceptin treatments.

In the midst of all this, Mimma participated in her first BRIGHT Run in 2016. Her oncologist, Dr. Mark Levine, suggested she join a team led by her friend Irene Stayshyn, but Mimma put together a team of her own, leading 50 family members and friends in custom T-shirts. The team came in first for fundraising by survivor teams.

“I’m not really comfortable asking people for money,” she said. “But people are very generous. For example, my eight-year-old great-niece Lejla collected $100 from her neighbours and her little friends.

“Her parents saw this as a learning experience and practice exercise of talking with people about supporting her great aunt who had been fighting cancer,” Mimma said.

Mimma and her team will participate in their third BRIGHT Run Sept. 8, 2018, walking the 5K trail at the Dundas Valley Conservation Area.

“What I love about the BRIGHT run is that the money stays in Hamilton and the research is done here,” she said. “It’s a great day. And I am blessed that I am here to celebrate it.”

This profile was first published in the BRIGHT eNewsletter in April 2018.