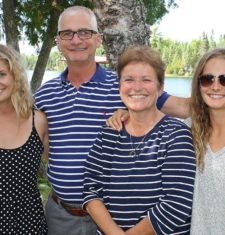 Less than a year after she was diagnosed with breast cancer, Pamela Jean is participating in her first BRIGHT Run, leading her team Princess Pam’s Tribe.

Since her Sept. 11, 2017 diagnosis, the 56-year-old married mom of two adult daughters has undergone three surgeries, including reconstruction. On her BRIGHT Run fundraising page, Pamela reflects on her breast cancer experience:

“My journey has definitely been an interesting one but I have had the most amazing doctors one could hope for. My friends and family have been wonderful and now it is time for me to figure out a way to give back and to make sure the fight continues for our world to hopefully one day be cancer free.”
Pamela, who lives in Burlington, says she initially thought her diagnosis was a mistake.

“I honestly remember feeling like ‘oh no, this has to be wrong. My doctor received the wrong information,’” she said. “My life was going to change forever.”

Pamela was very close to an aunt on her mother’s side who had both breast cancer and ovarian cancer. Her aunt passed away in March.

“She was a fighter and so am I,” Pamela said. “I will always admire her strength and determination.”

Up until 2015, Pamela had not had any serious health issues. But that spring, she was diagnosed with a rare autoimmune disease and she was prescribed a range of medication combinations before finding the mix that helps control her flare-ups.

In the fall of 2015, she suffered a stroke that left her without the use of her left arm, hand and fingers. It was only through intense physiotherapy that she regained her independence and was able to drive again.

In August 2017, she received a reminder letter that she was due for a mammogram. She had her mammogram, then received a call that afternoon that additional imaging was needed. Then she had a biopsy. Within five weeks of the mammogram, she underwent the first of her three surgeries.

Pamela and her team came to the BRIGHT Run on a bit of a round-about way.

When she was diagnosed, one of her daughters wanted to do the national breast cancer run, the Run for the Cure, but was unable to do so because she was recovering from a broken ankle. It became the goal for 2018.

“Then I found out about the BRIGHT Run and I was so impressed that everything stayed local, so I decided this was what I wanted to do,” Pamela said.

She originally set her fundraising goal at $300, thinking people might be unlikely to support something so local given there is a major national event that raises funds for breast cancer.
The first $300 came quickly, so she raised her goal to $700, then again to $1,000.

“Fingers crossed we can surpass that,” she said.

This profile was first published in the BRIGHT eNewsletter in August 2018.