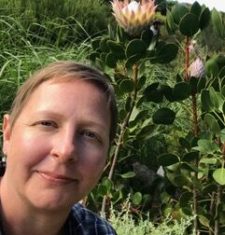 As a radiation therapist, she has spent 25-plus years treating cancer patients at the Juravinski Cancer Centre.

As a breast cancer patient herself, the Waterdown resident appreciated a whole new dimension of cancer treatment.

“I found it completely overwhelming,” said Lisa, who is the BRIGHT Run’s 2019 survivor spokesperson. “Even with my background, and with a wonderful medical team explaining everything, it was very difficult.”

Each year, one of the survivors in the BRIGHT Run breast cancer community takes on the role of survivor spokesperson, telling their story on event day. It is a moving tribute to both the individual and to all breast cancer patients.

Lisa says her cancer experience has enhanced her work as a radiation therapist.

“Everybody’s experience is their own,” she said. “But when you see a patient who is really in distress, it does seem to help if I ask if it would help them to learn that I’ve been there.”

She has also shared her feelings about treatment with her colleagues.

Lisa was 45 when she was diagnosed with Stage 2B infiltrating ductal breast cancer in March 2015. She underwent surgery, chemotherapy and radiation treatment. She also participated in a clinical trial of oncotype DX testing, which is used to help determine if a patient needs chemotherapy.

About 15 years ago, Lisa’s mom was diagnosed with breast cancer at age 64. A year later, she developed a second breast cancer in the opposite breast. Today, at 79, her mom is cancer-free.

That experience led Lisa to her first mammogram at age 40, which was clear. She had another mammogram at 45 and that led to her diagnosis.

“I didn’t feel a lump,” she said. “I went for that mammogram on a coffee break, was recalled and had an ultrasound and biopsy the same day. That’s how efficient they are at the Breast Assessment Centre.”

BRIGHT 2019 marks Lisa’s 11th year as a member of the Linear Accelerators Team, a team of radiation therapists and their families and friends based at the Juravinski Cancer Centre.

She joined the team well before her own diagnosis, and over the years was joined on-and-off by her husband, David, and their two adult daughters, one of whom is a radiation therapist in Calgary.

Since 2015, though, the whole family has turned out for the event and David has joined the BRIGHT Run executive.

At the 2016 BRIGHT Run, Lisa and a work friend listened to that year’s survivor spokesperson, Donna Stampone, and the friend predicted that Lisa would be on the BRIGHT Run stage telling her story someday.

“I wasn’t so sure about that,” Lisa said with a chuckle. “I like small groups more than large ones! But I sort of felt it was inevitable because I do have an interesting perspective.”

Although she is somewhat nervous about how to talk about such an emotional topic, she also sees it as an opportunity to close this chapter of her cancer journey and continue on her road as a cancer survivor.

“I do feel a responsibility to give back to the community that helped care for me so well,” she said. “This is one way to do that.”

This profile was first published in the BRIGHT eNewsletter in August 2019.