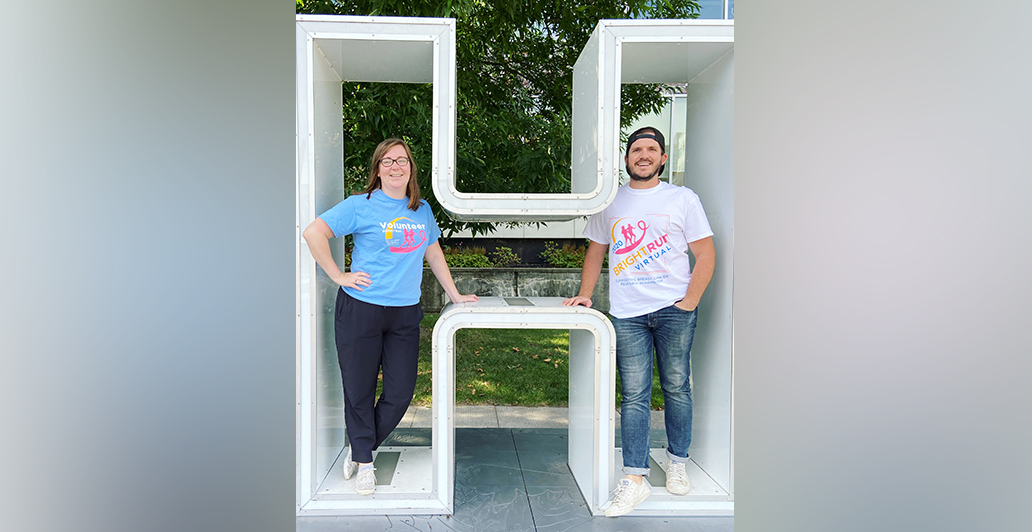 She and team member Mike Ecclestone own Kitestring, the Hamilton marketing and design agency that partnered with BRIGHT Run to produce our first virtual event.

“The rest of our team walked in their own neighbourhoods, safely on their own or with close family,” Marin shared. “It was a beautiful day to go for a walk, we all wore our BRIGHT T-shirts and had a lot of fun.”

Both Marin and Mike have close family members who have had breast cancer, as do several of their team members. Their involvement in BRIGHT Run went beyond a business relationship; they became personally invested because they loved “the passion behind the event and the organizers who make it happen,” Marin said.

BRIGHT Run felt like a fun, engaging event – even in its virtual format – and a reason for us to be more active throughout the year to raise money for an amazing organization.

The six-member team raised $2,325. Marin admits to some discomfort asking for donations during a pandemic when many people were struggling financially.

“But the phrase ‘every dollar helps’ is so true,” she shared. “So, we encouraged people to donate what they could, if they could, and left it at that. We had a great response.”

The team sought donations on social media and reached out to friends and family. Marin is pleased with the team’s first fundraising effort.

While she and her team members have not experienced an in-person BRIGHT event, Marin said she and Mike had fun at the drive-through T-shirt event held in August at LiUNA Station.

“It was great to see everyone in person, even masked up!” she said.

“We also loved seeing people sharing their walks/runs on social media during the event,” Marin continued. “It brought a real sense of community to the virtual format and gave us a small glimpse at the BRIGHT Run spirit that has built over the last 13 years.”

Marin looks forward to virtual BRIGHT 2021 because breast cancer doesn’t stop for COVID-19 and neither should breast cancer research. While she and her team would love to participate in an in-person event, safety is the paramount issue.

“We’re happy to be patient until it’s safe to gather together,” she said. “The virtual format is a lot of fun and gave our team members a chance to participate how they wanted, when they wanted, from wherever they wanted!”