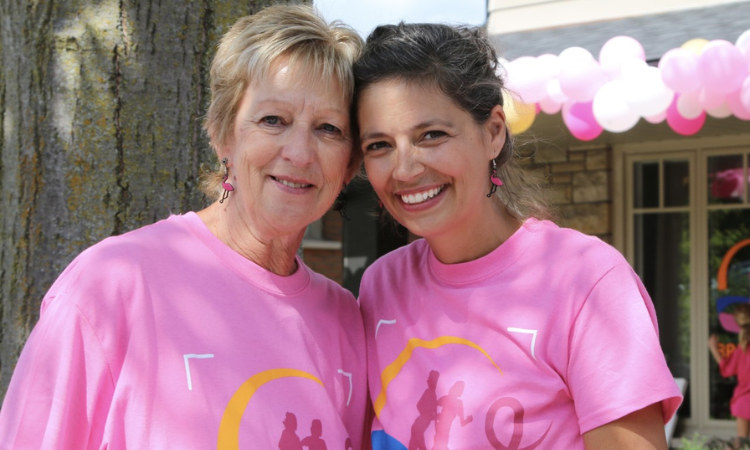 For Gerri Nyman, the most important thing about the BRIGHT Run is that it provides hope.

“Our whole focus as a team (Let’s Bust a Move!) in the past couple of  years has been HOPE” she said.

Gerri, a retired registered social worker with experience in child protection and children’s mental health, is the BRIGHT Run’s 2022 survivor spokesperson. She is excited to be spokesperson for the first in-person event since the pandemic took BRIGHT 2020 and 2021 virtual.

Gerri says one of the hardest parts of her 2016 cancer diagnosis was deciding how and when to tell the people closest to her.

“We told the kids (adult sons and daughters-in-love Mark and Jerilee, Craig and Beverly and Trevor and Selina) that I was having a biopsy,” Gerri said. “They were thankful that we told them at that stage in the process. They said it made it not as hard to take in when we received the diagnosis.”

A concern was discovered after a routine mammogram. This led to an ultrasound, then a biopsy, and when the cancer was confirmed, surgery, radiation and maintenance drug therapy.

“After the initial mammogram, I received a phone message indicating there was an area they wanted to look at more closely,” she said. “Based on the seriousness of the message, and the rapid follow up, I was highly suspicious it was cancer.”

The diagnosis was still shocking. At 56, Gerri maintained a healthy lifestyle, eating well and exercising regularly. Her family history included one aunt who had been diagnosed with breast cancer, but that was it.

“I had a brief period where I asked ‘why me,’  but then I realized, ‘why not me?’” said Gerri, who was treated at the Juravinski Cancer Centre (JCC).

Henry, Gerri’s husband of almost 42 years, and the rest of her family provided great support during diagnosis and treatment.

“We’re a faithful family and that plays a huge part,” she said. “We’re also a close family and our motto was, ‘Together, we’ve got this.’”

For a couple of years after her diagnosis, Gerri and the family planned to participate in the CIBC Run for the Cure, but family events got in the way each year.

Then in 2020, Jerilee was diagnosed with Stage 4 metastatic breast cancer. This diagnosis devastated the whole family.

Early in Jerilee’s cancer treatment at the JCC, she spotted a banner for the BRIGHT Run.

“She called me and said, ‘Mom, we’ve got to do this,’” Gerri said. “She knew she had a hard journey ahead. She loved that the money raised stayed local and she wanted to give back to the JCC. With me being a survivor, we felt we just had to do it.”

“We were in awe,” Gerri said of the first year. “Donations poured in! It was beyond anything we expected.”

“It really gave Jerilee something to focus on, other than the uncertainty of the future,” Gerri said.

Jerilee lost her breast cancer battle in February this year at the age of 38.

“Jerilee was passionate about BRIGHT Run,” Gerri said. “Participating in BRIGHT Run and raising money for breast cancer research provided her with the hope that no other families would have to experience what they had over the last two years.”

Gerri says Jerilee’s husband Mark and daughters – along with the rest of the family – are really excited for in-person BRIGHT Run 2022.

“We all can’t wait to experience the in-person event,” she said. “We have heard so much about the excitement of event day and we are so looking forward to it. Through our involvement with BRIGHT Run we want to share with others the need for strength for today and hope for tomorrow!